Do built playgrounds force children to be passive? 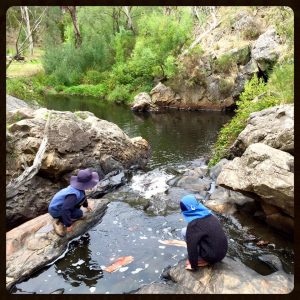 The other day I took some children on a long walk – the Women’s Pioneer Trail in Bridgewater, SA – that leads to a rocky area with waterfalls and deep pools, quite a gem in this area. We were hunting for brambles, hoping to fill our bellies with foraged food – but we’d made some fruit-filled muffins earlier in the day just in case we didn’t find the ‘mother-lode’ of blackberries I had found previous years.

It was a big walk for little people, and on our return trip they were tired and dragging their feet – and, not being an octopus, there were only so many hands I could hold at once. The promise of our muffins, while going a long way, wasn’t quite enough to keep those weary feet tramping! Rather than eating our muffins on the oval, I suggested, how about we get back in the van and drive the 300m or so to the new playground? It’s a perverse truth of childhood that a way to overcome exhaustion is to suggest something they should be too tired to contemplate… Or perhaps it was the picture that immediately formed in their heads of being ‘in the van’? Either way, we made it back to the van and all piled in, were done up in child restraints and then drove the very short distance to the playground carpark.

This playground had a particular appeal for being very new – these children hadn’t tried it out before. And it looks great – soft, green grass, big timber structures with thick steel cables, a roundabout, flying fox and long slide. Everything shiny, new and as yet unused – the children all tumbled out and ran with new-found vigour.. 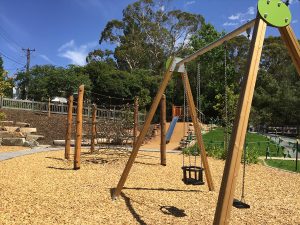 Now, I should point out here, I am not a fan of playgrounds. When my own children were young, I felt morally obliged to visit playgrounds. Whether a stop off on the way back from trips to the city, or with picnic packed and rug under arm,  the inevitable outcome would be me standing, pushing one child on the swing, running to catch another at the bottom of the poorly-designed, too-fast slide and helping a third onto the only climbing apparatus available, too high to be independently achieved…

For me it was an intensely boring experience – a chore to be got through because everyone knows children like playgrounds. As I stood yawning, almost catatonic, I felt like a terrible mother. All I wanted to do was sit on a bench and vegetate – a moment’s respite in an otherwise frantic day with 4 young children. [It was years before smartphones – If I’d pulled out my phone to briefly check in on the outside world I rarely engaged with I’d no doubt have been further judged for not being constantly involved with my children…]

Fast forward back to the other day, and as I lifted a child into a swing and was compelled to stand pushing him, while being urged to attend to another child who was struggling to pull the flying fox to the starting point, and another wanting the roundabout to be twirled… I realised what it is I LOATHE about playgrounds. Young children are not able to be independent in accessing most of the facilities. Adults are forced to assist with lifting, pulling, pushing – all valuable activities for developing bodies but designed in a way that preclude little ones from taking active part. It forces passivity in an environment that looks like it is promoting the opposite. I have a rule in my own parenting and child-care practice that a child must not be assisted to do something if they are going to need a greater part of my help than their own ability to achieve this. 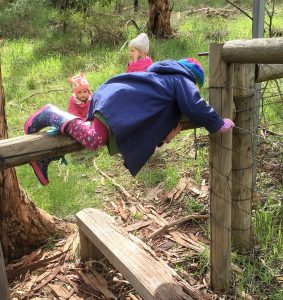 For example, one of our regular bush walks takes us over (or under) a style. The smaller children are often keen to follow the bigger ones over the style but just cannot manage it on their own. They stand, and attempt to swing up their leg, grasping for the fence post just out of reach. Inevitably, they will say ‘help me’. Where I can see they are close and just need guidance about where to put hands or feet, I do this verbally. Where it is obvious they won’t get over without me physically helping, I gently suggest climbing down and going under – maybe next time you will be big enough? There is such joy when, next time, or the time after, or even weeks later, that child achieves what had hitherto been impossible. It is an intense sense of personal pride that can never be felt when you are lifted over the very first time you try.

There are playground designers out there who create amazing playscapes out of natural materials that have varying degrees of difficulty – by using height, distance to reach  etc –  so that children (and adults) of any age, capability and courage can be challenged at their own level. I guess these look more like the monkey enclosure at the zoo, with ropes, and branches and slides and less like the very slick, landscaped environments local councils tend to favour. 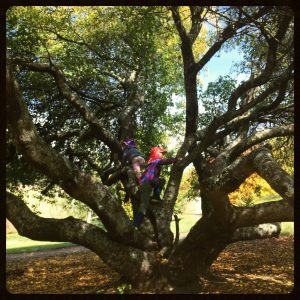 This is of course, why nature experiences are so great for children. With trees to climb that have lower limbs leading to higher perches, stepping-stones across creeks, hills big and small to roly-poly down… These experiences all offer a challenge to those who have the courage or capability to take them to the level of their own development, not a starting point created by a clever play-ground designer.